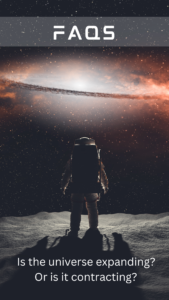 Blue shifts occurs when the emitter and receiver are moving closer together. This causes the waves of light to reach the receiver at a faster/higher frequency than if they both were still. Higher frequencies appear on the blue side of the spectrum.

3. What is Newton’s Universal Law of Gravitation?

Dark Matter is “dark” because it is difficult to detect since it does not interact with the electromagnetic field (so no electromagnetic radiation to detect). It is still a hypothetical form of matter.

In short, unknown. Dark energy is a hypothetical form of energy to explain how the universe is expanding and suspected to make up most of the mass-energy content of the universe.

A black hole is a region of spacetime with gravity that is so strong that no light or particles can escape from it.